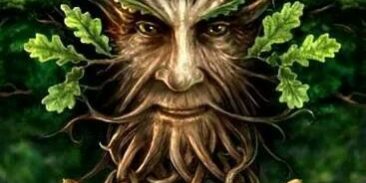 Growing out from his leering or smiling mouth, leaves and stems twist around the edges of his face, the Green Man is a fabled reminder of our deeper past wherein Nature and humanity lived together in both union and harmony. I’ve often wondered whether his open mouth now screams in pain, as opposed to laughs in joy, as the cancerous grey-whites of imposing concrete cities gradually eclipse the browns and greens of his body.

A largely anonymous figure who was given a voice by Lady Ragan in 1939 in an attempt to remind an industrialising world of its authentic, ancient and true origins, the Green Man has become a somewhat counter-cultural icon, adopted by those turning their backs on consumerist culture and returning to a more Nature-conscious reality in the late 1960s and early 1970s.

Regardless of the origins of this ubiquitous hybrid being, he serves to reminds us of our vegetal origins being, as we are, both human and plant, inexorably linked and utterly dependent upon the natural world, something that we, in the West, have been so keen to subdue and subjugate. Our predecessors knew we are a part of nature, children of creation, as much as they knew that to thrive we needed both balance and sacredness as they listened to our heavenly father, to Mother Earth, to The Green Man and to the spirit world that guides and informs our reality.

This ancient guardian of nature, one who holds her as sacred and protects our mother earth, he is both life and rebirth. He is the end and the start. For what is the grave but a merely cradle as we birth on from this realm to elsewhere, and perhaps even return here in infant form? Humanity’s hubris believing that physical death can be cheated and that we can live forever is deeply ingrained within our collective psyche and has its origins within our sedentary, domesticated lives, as over time we separated ourselves from Nature and Her rhythm. 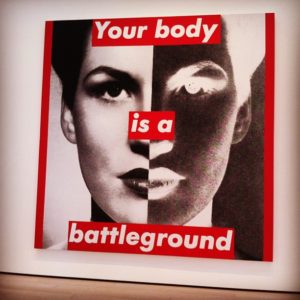 And now we sojourn but briefly in Nature, her wildness tamed, her fauna domesticated, her flora manicured and her fruits synthesised and carbon copied, licenced and patented by faceless corporations whose greed threatens our very existence. In a relatively short space of time Nature has become cultivated, blanched and made sterile beneath the icy cold blades that cleave her open for our gluttony.

No longer encouraged to revel in dirt, to walk barefoot and feel the intimate symbiotic connection between our external and internal environments, the artificialness of the world we are consenting to create has generated a deep illness that has virally spread around the globe. Instead of connecting to the spirit that dwells within Nature, we have opted for a less conscious variant of this archetypal signature – the lower dimensions of desire, feeding an insatiable hunger that can never be satisfied.

It is because of the existence of the Fixed Earth, or Taurean, expression of consciousness that your sOul is anchored within this physical realm of existence, encased within a physical body and subjected to all the aromatic delights that the world can offer:

the wafting of a freshly brewed morning coffee; the freshly mowed grass on a cool sun kissed vernal morning; the crisp ionised air that surrounds a babbling and cascading brook and its fresh coolness that fills your lungs as you stop to breathe in the sounds of the water, as it crashes over the stones and rocks, eagerly chattering its way towards the contrasting quietness of the forest lake; the dense scent of vanilla-musk body spray that makes you feel dizzy as you linger in that first close embrace with a lover-to-be – can quickly wash you of your memory that you are to enjoy being in the world, but not being consumed by the world!!

The full spectrum of your physical-desire nature exists because of the Taurean dimension of our collective consciousness. Twentieth and twenty first century capitalism has played on your physical-desire nature by encouraging you to consume, to indulge and to bathe yourself in an array of sensual pleasures, without ever asking you to stay still and truly savour the moment.

All my life, I’ve been searching for something
Something never comes, never leads to nothing
Nothing satisfies but I’m getting close
Closer to the prize at the end of the rope 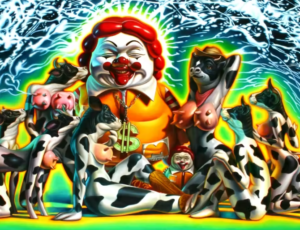 I remember the last time I set foot in a McDonalds to order food. It was October 1989 and I was a hungry, broke student, who could just about afford a burger and fries for lunch. About a half an hour after devouring what looked like food, I was still hungry. It dawned on me that real food fills your stomach and leaves you with a satisfied, complete feeling.

But a grumbling stomach having emptied my pockets of change was not good value, and so I decided I was done with McDs. I found a veggie café, filled with intelligential bohemian students and good, filling, natural food which started a life long journey with non-processed food. Many of you reading this offer are of similar values and will wonder at why fast food still exists, given the awareness, knowledge and research available to turn folk off food that remains fresh for weeks at a time.

Yet, the hunger to replace the car every few years, to update your phone to the latest model, to consume more and more energy, to buy plastics, to purchase cheap clothes, to … the list is endless, is part and parcel of our current reality, and it is a reality that is rooted within the spectrum of the Taurean archetype. The desire to experience all that you can; the hunger to consume; to accumulate; to hoard; and to possess, are all expressions of this zodiacal sign. As the Foos sing – done, done and I’m on to the next one…

But physical-desire is only one aspect of this portulent archetype.

The need to learn the deeper spiritual lessons of desire wherein you can transform the energy of desire into spiritual aspiration is encapsulated within an exemplary Taurean philosophy – Buddha’s Four Noble Truths (remember that the Buddha’s birth (and subsequent enlightenment) are celebrated during the Full Moon in tropically Taurean May). 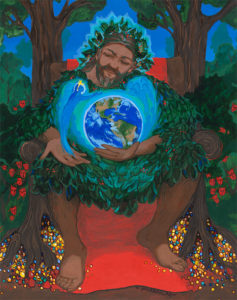 It is through your desire-nature that you are kept fastened to the Earth Plane on a perpetual cycle of death and rebirth. Without sounding puritanical, requesting that you negate all that your senses perceive, it is the teaching of all spiritual disciplines that any unhealthy desire attachments essentially keep you bound within your ego-mind and need to be eventually overcome, thereby allowing the energy of desire into transform into spiritual realisation. And so it is within Taurus that your desires and your most materialistic impulses can be transmuted into aspiration through the light of illumination.

Ultimately the Taurean patterning concerns itself with the impact of spiritual energy within the world of form. Taurus simply symbolises the embodied material form of creation –our bodies, our environment, our world. In other words – Nature herself!

Taurus was always considered by the ancients to be connected to the spiritual light held within matter, as evidenced by the plethora of astronomical phenomena surrounding this constellation. Known as the Light of the Bull in Akkadia, the constellation of Uru-Anna or Orion, the Light of Heaven or He who cometh forth as Light; the star Aldebaren (The Torch, Ptolmey), one of the brightest stars in the night sky found within the ‘Eye of the Bull’; the cradle of our consciousness, The Pleiades, used as a Native American Indian eye-sight test; the constellation Erdianus, the Light River; and finally if you accept the hierarchical rulership within astrology, Venus as Lucifer, the Light Bearer, who is said to have dominion within Taurus.

Planets that you have within the sign of Taurus can teach you what specific dimension of your Soul is here to learn about the nature of desire. If you don’t have any planets within Taurus, then look to the house that Taurus is either on the cusp of, or intercepted by, to understand the arena of life wherein your desire-nature will be played out.

The path of Taurus necessarily involves a strong will and strong choices, for desire has the habit of leading your attention outwards towards worldly concerns. Those Taurean planets, just like the Green Man, are custodians of the light of knowledge, enabling you to tap beyond the seduction of the world of form, releasing all attachments and security desires, thereby enabling you to acquire enlightenment as you open the eye of the cosmic Bull, bathing in the light that cascades like devotional tears from it, cleansing and purifying your soul.

It would be my hope that you spend some quality time in wild nature, Nature relatively unblemished by the architecture of humanity, Nature that still has a voice, Nature that teems with life. I hope you can spend time listening to the trees, to the rocks, to the land itself and to take on board what is revealed within the eye that sees. I hope that you recognise why you are craving to fast and to forsake processed foods; that your body is not just getting ready for designed food shortages, but it is truly listening to the January 2020 redistribution of power wherein Gaia herself sent out her warning to humanity hell bent on creating Frankenstein.

I would hope that you remain conscious when preparing food from scratch, regardless of how busy you believe your life to be. I would hope that you talk to your food, blessing it and consequently raising its vibration, as you raise your own vibration. After all that it what it means to invoke the Green Man, the Light of the Bull and the Taurean archetype within you during this Saros 119 Fixed Earth eclipse on the 30th of April 2022.

Please listen for this noble guardian of Earth; listen, for there is no purpose to teaching otherwise.