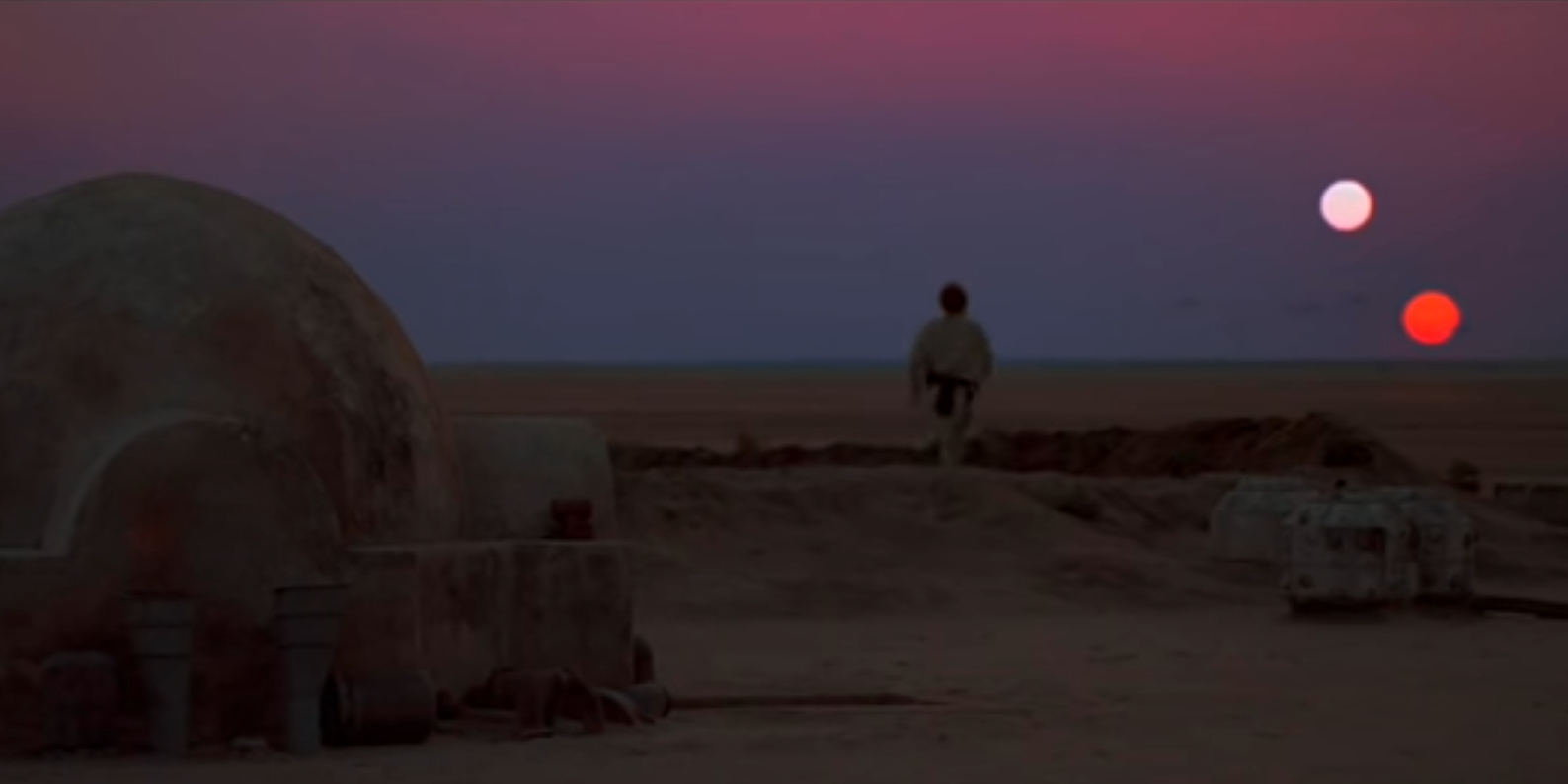 That our world is somehow incomplete?

Gutted, dreams shattered by an old man to fearful to let him pursue his vision, he rises from the dinner table and takes his leave to consider his fate. Quickly ascending the stairs two at a time, he exits the dark and dreary stairwell of his home-prison and enters the fading purple light of dusk. Eyes cloudy with unspilled emotion, head weighed down by far, far away thoughts and longings, this young, idealistic farmhand, he nonchalantly kicks away dust from beneath his right foot as he gravitates towards the western horizon, that place wherein our Shadow looms large as we seek to free ourselves from all that binds us to this world before we descend into the underworld, to gaze forlornly at the sky scape.

A dewy French horn strikes a long and haunting D, offering a new hope as it ascending a perfect fourth to F, before wavering and faltering as it trembles around the mournful and poignant A flat, as the binary suns set over a barren desert horizon.

Iconic, a scene etched into a seven year olds mind’s eye, mirroring a recurrent dream that I had had since the age of 3 or 4 wherein I hiked to the top of a hill, ahead of a group of faceless but friendly souls to watch the Two set over a lake.

Pure fantasy or a distant memory of something, somewhere else?

Does art reflect reality or vice versa? After all there exists a fine line between the imagination of a dreamer that consciously knows and creates, bringing into form from the liminal world, their spirit, and the fantastical delusion of pipedream based in an ego unwilling to draw forth from that inner vision.

Surely there is nothing true about a fictional planet orbiting two Suns in the far reaches of a galaxy far, far away at a time long, long ago? Perhaps not, after all ancient stories have talked about our Yang Yellow Star missing its Yin companion as we are one of the few solar systems that is not binary. Whether our companion is as the Egyptian’s believed , the Spiritual Sun behind our Sun, Sirius; or Jupiter, so large replete with all the composition of what makes a Sun a Sun, that never quite made it to Sun-status or deflated down to planet-status; or the Oort cloud that never gathered itself to create that companion from the ribs of the first man; or that she was banished from the Garden for not consenting to subjugate herself to the whims and entitlement of the masculine, the legacy of our companionless star is enshrined within the motifs of the zodiac as Cancer gives way to Leo.

The iconography of the zodiacal signs and planets yields profound wisdom to those who read symbols, after all what is astrology but a multi-dimensional, non-linear language of consciousness, which enables the interpreter to translate differing meaning to the seeker in accord with where that initiate is on their path. The image of Cancer, often depicted as a pair of women’s breasts, is simply composed of two of the three building blocks of used in astrological glyphs – the circle of spirit and the semi-circle of soul.

The Glyph of Cancer

The semi-circle gently touches the circle and at one level shows the arced path of the Sun’s ascent through the gateway of incarnation, the East door, cresting loudly and majestically upon its southern throne at the height of the day-light, before falling towards the Western door, where it will leave the Light and return to the Dark. The second Sun journey’s through the depth of the interior world, again being led by the sOul through the various stages of the disincarnate realms, before connecting with the dream beyond the dream, and ascending towards the East portal to re-embody itself as a physical being.

Two spirits, both led by a liminal experience, one that journeys within the world of light and one that journeys within the world of night. Two Lights, one yang, the other yin, delicately balanced, rhythmically dancing in a Sufi swirl, cyclical, yet spiralled. Two stars to light our way, the path of action and the path of reflection; the journey to become and contentment of being; the exploration of the visible world and that of the invisible and intangible.

Enshrined within the Christian story, more clearly seen if the glyph for Cancer is turned on its side, we have the Johannes the Baptist and Yesuah the Messiah, whose symbolic birthdays are celebrated at the two Solstices, a time in the annual cycle where the Sun stills, heralding the height of Summer or the depths of Winter. Reflecting on this side view of Cancer, we see the movement of the Sun from its perch high up in our Summer skies, following the arc of the ecliptic towards the Nadir, where it coldly settles low on our horizons at mid-Winter, before again following the arc up and out into the glory of the hot Sun.

Within the esoteric tradition it is said that souls manifest in pairs, one heralding the other, both inseparable, both equally poised to balance out their tasks within this plane of existence. The Essenes, a mystical sect from which Jesus (Yesuah) and Miriam (Mary) arose, taught in pairs, a male and female initiate, whose paths interwove around each other.

Similarly is the relationship between Johannes the Baptist and the Christos, Yesuha. Johannes anoints the Christos, recognising and acknowledging the incarnate gOd (Sun) within the physical realm (Summer), who had come to Earth to show us the path inwards (Winter). The image of a statue is from Sant Nicholas in Siggeiwi in Malta and it depicts the anointing or baptism of the Christ, via the sea-shell, an symbol that invokes that of the Magdalene, whose Light has been intentionally hidden from view, but whose quiet presence co-exists with that of the Christ, recently recognised by the Vatican, not as a prostitute but of Christ’s equal.

Moreover, in the apocryphal Aramaic Gospel of the Nazarene, Yeshua states, “I and my bride (Kaltra) are one – just as Mariam the Magdalene, whom I have chosen and sanctified as an example, is one with me”. The word bridge in Aramaic is Kaltra, which can also mean an inner bride, or the feminine principle. (quoted from Lars Muhl, The Light within a Human Heart, p129)

From a pagan perspective, this birth of the Christos’ birth is celebrated at the end of the Winter Solstice, just as the Sun starts its climb up and out, as the disincarnate gOd becomes incarnate, moving from inner to outer. The celebration of the baptism takes place at the end of the Summer Solstice, just as the Sun starts to pull away from the world and move towards its death and rebirth.

Moreover, many of the Egyptian pyramidal temples remember the disincarnate Sun through their astronomical alignments to Sirius, a star that heliacally rose heralding the flooding of the life giving Nile to the quench the thirst the desert plains, reminding us that growth without sOul is sterile.

And yet, something is missing. 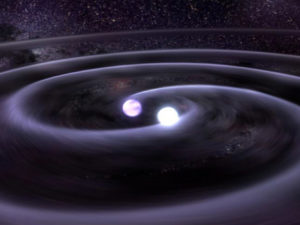 Is the absence of our Yin Sun the reason why patriarchal viewpoints have relegated all that is quintessentially feminine – reflection, space holding, instinct, intuition, symbiosis, serendipity, non-linear, non-sequential and holistic – to the dusty back shelves, as that Yang gOd is honoured and worshipped literally and figuratively? Did that occur as the catastrophist and psychoanalyst Immanuel Velikovsky wrote – that the conflict on the Earth was shaped by the extraordinary developments of our planets and Sun within human history? Or is it merely symbolic of this missing Yin Sun?

And yet the symbolism of the two Suns is encoded within the glyph for Cancer. Therefore the second Sun does exist! It is currently within. It is the invisible light that proactively guides the outer light with instinct, feeling, intuition and the dream. It is the interior light that radiates meaning, vision and sOul. It is the liminal radiance that illuminates all that is the imaginal. It is the light that enables us to find our way in times of forlorn, disappointment and disillusionment, mirrored in that evocative scene in Star Wars where Luke gazes at the setting Suns, aptly symbolising the necessity to pull away from the world to feel the Force and follow it blindly.

Maybe in time, our Second Sun will be revealed, but I feel it is more than apt that this Second Sun exists within each of us, a Sun that guides us internally, and whose light prompts us into an outward expression of sOul, deep feeling and proactive use of the emotive senses, qualities that anyone with planetary archetypes within this zodiacal sign know all too well.

Luke was a twin, his sister hidden from him to protect them from a father who had been driven mad with visions of his beloved dying in child birth. Whether you are partial to sci-fi or otherwise, Star Wars is a modern myth that tells the story that the power of the Force is only complete when balance is obtained between these two fundamental states – Yin and Yang, and enshrined within our psyches as the perception filter called Cancer.

As the Sun and Moon unite early in the European morning this coming June 29th, it is a timely reminder to not lose hope and to listen deftly to your inner light, as it will guide your outer light through the vicissitudes of our egoic world. Blessings to you and the rekindling of hope, a state of consciousness that actively creates from a place of the heart.