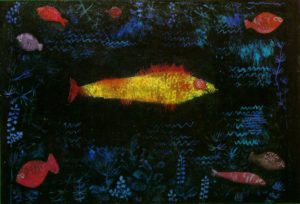 Straddled between two worlds yet eternally bound to both, the Piscean archetype is the alpha and omega within the consciousness spectrum held within the zodiac belt. The complexity of this fathomless realm is due to the co-existence of a liminal duality that blends Senatrix and Neonate; Krone and infant; Sage and Novice; Veteran and Greenhorn, into one and the same.

Engaging blindly in life, yet also surrendering to a higher essence; innocently reaching out to the world in fresh, wide-eyed abandon, whilst at the same time instinctively discerning with guile and discretion; and emoting with such enthusiasm and time-honoured wisdom, is this ‘living-imaginal’ sign spirit lacking embodiment or matter lacking spirit; or is it merely able to extend across and live comfortably within those two primal states of being? 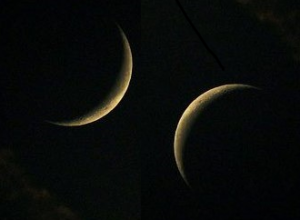 e key to understanding this sign is held within its iconography and moreover within its glyph. Perennially associated with symbolism of both the fish and ocean, the glyph, for me, holds within it the deepest meaning: the two phases of the crescent Moons, spanning, yet tethered by, the incarnate plane of matter.

Human consciousness is the field where three kinds of light are manifest: creative light, reflected light and revealed light. The first participates in the work of the creation; the second illuminates the dark field of action of the human will; and the last orientates us towards transcendent values and trust which constitute the ultimate criterion of all that is of worth and of all that is true in space and time. That light is held within the Sun, the Moon and the stars. The Moon is that reflected light, illuminating the path within, yet still bound to the plane of matter; it is the gentle light of the interior world, the world of the imagination and the world of sOul.

In captivate rotational orbit with Terra, the Moon’s phases weave in and through your consciousness an undulating and vacillating pathway, ebbing and flowing, waxing and waning, cyclically drawing you out and up and down and in. As a keeper of time, the waxing crescent Moon heralds the dawn and the birth of a new world, filled with anticipation, eagerness, innocence and awe, and the fecund anticipation of that which has unlimited potential. The waning crescent Moon, or balsamic Moon, on the other hand is that wily time that prepares you for death, ever encouraging you to reflect on all that has come and all that you have experienced, as stillness approaches with the dwindling light. 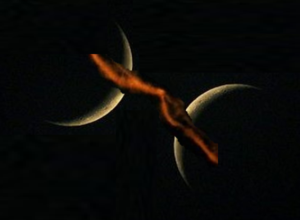 The local horizon splitting the Moon in two, anchoring the liminal light to this physical plane, it grounds and unifies two different states of emotional being, blending them together, and rendering them one and the same. Emerging out from the depth of the underworld, but not fully escaped that darkened place, the rising waxing crescent brings with it wisdom from the ancestral realm and experiential acceptance of all that is; whereas the setting waning crescent carries a wealth of experience and insight back into the depth of the collective, simultaneously informing and raising awareness.

Past and future, death and birth, conscious and unconscious, embodied and shadow, dawn and dusk bound together, all revolved around your soul, as the earth to the sun.

“I am the Alpha and Omega, the beginning and the end. I will give unto him that is athirst of the fountain of the water of life freely.” Revelation 22:13, spoken by the Ichthys, him/herself – the Christ or Fisher of Man, Yesuah or Jesus. 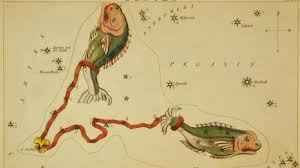 The consistency of the iconography of this ancient sign is phenomenal, as all cultures from as early as 10,000 BCE have depicted Pisces as representing two fish lying back to back and joined

across the middle, swimming in different directions – one up and out towards spirit; the other down and across the plane of matter. Neither can swim apart from the other, connected are they by a ‘rope’. There have been occasional variations of the two souls bound, the Babylonians, for example bound a bird and a fish and the Isis Mysteries of Egypt depicted two souls in primordial Elohim submerged within the deep waters of Mother-night, but in truth, the persistence of the fish imagery goes beyond the modern correlation of the ‘depositor’ of Pisces, Neptune (god of the Ocean) with this sign.

Our predecessors saw gOd in the water, as we emerged out from the waters onto land and it is there that our Essence can be rediscovered. Water is formless, yet is neither chaotic nor fragmented. It has no shape, taking on whatever contains it. It holds an imaginative invitation, drawing forth from its depths innumerable dreamlike images that flow beneath the waking surface of life.

Fish are the living content of the fluid medium, making its invisible content visible. They symbolise our lost participation in the unconscious world and are the focus of many a spiritual teacher’s analogies as they cast the net out to sea to draw from the Akashi pearls of wisdom. They are a symbol of spiritual liberation because they show the freedom of the sOul swimming in the waters of Nirvana. Paul Klee, an artist with a Piscean Moon, felt that his painting were like dreams that could be plucked out like fish.

Pisces, or Mutable Water as it is more formally known, is where the human and the divine intersect. Within this realm the challenge arises to prompt you to find a way to unite the opposites in a synthesis that includes and transcends both. In other words: To be in the world but not of it.

This is the teaching of most of the spiritual disciplines that have arisen with the past two thousand years, during the time that the slow precessional clock has been moving back through the Piscean Sign. It is not an easy path and yet appears to be the way.

Giving form to the liminal world – the youthful passion of innocent awe, with the mature awareness of devotion and dedication – is what is encoded within the glyph of Pisces, as the Crescent Moons are bound together. Also honouring the transcendental, which is implicitly inherent within this sign, as Pisces is at the intersection of death and birth (hence the correlation between Pluto and Pisces within the esoteric tradition). It is the crucifixion and the resurrection, as depicted within the Piscean mythology of the Christ (that shamanic initiation of dissolution, dismemberment and suffering, leading to great compassion, as your eye opens to the truth of the illusion of death and the presence of the sOul in all things).

To honour the transcendent means to recognise that you come from the waters of the Mother and to there you will return.

When you are in touch with the sea of the unconscious, you can produce with great imagination and sOul, as much as getting pulled under into dissolution and madness. The Shadow of this sign is depicted by the Greek myth of Typhon, the son of Gaia (Earth) and Tartarus (the Underworld), the chaotic sea monster that devours life. The light of this sign is the Christ, an expression of embodied enlightenment. 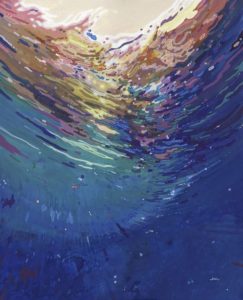 As the Sun and Moon unite within this watery sign on the 13th of March, the question arises whether you are prepared to exist within a ‘pisciculi’ state, a semi-conscious soul focused on a one-sided development of your consciousness, or to actively develop the ‘ichthys’ potentiality embedded within the Piscean glyph – your consciousness is both here and now, and all and beyond?

Will you give form to the depths of your imagination, trusting that you are a conduit through which the sOul of the world is expressed and that your creation is not truly yours but merely comes through you? Or will you continue to believe that is ‘air you are breathing’, seduced as you are by the world of form, ownership and possession!?

We live within a remarkable time and engaging in life as it has been is no longer an option. The belief that matter is agency and primary is one of the biggest lies that is being slowly revealed. Within this redistribution of power, the movement towards a reality that once again seeks to return to a state of innocence with a discerning wisdom, appears to be quietly underway. This is particular evident in the empowerment process that most women are feeling. I will be holding a space that you can make more conscious the Piscean within you and within the world at large.

And I pray to the Ichthys within you and not the Piscuculi!