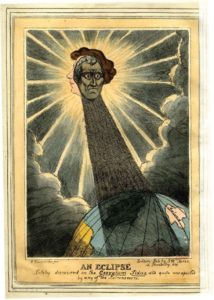 Feared for aeons by those disconnected from the rhythm and immanency of Nature, perpetuated by those enslaved to the egoic ruling classes within the patriarchy (after all what is an eclipse but a time to ‘witness’ the dimming of the Masculine Light) who sought to bolster their personal ambitions with mystique, false prophecy and control, the dread-based psycho-spiritual interpretation of an eclipse, unfortunately remains at large within a culture, still chained to a pyramidal hierarchy, too swamped by information to dig a little deeper and hungry for sensationalism.

Twice a year the Sun is eclipsed. Whilst each eclipse has its own personality and is a member of a family stretching back and forth through time, as it tracks from pole to pole, you would be forgiven to think that eclipses are portends of doom. Yet an eclipse is a New Moon, of which there are 13 in a year. What is different about an eclipse New Moon is that the Moon passes ‘in front’ of the Sun, as seen from very specific locations on the Earth. As the Light of the Star dims, we are reminded to place our emotional body and inner Light before the Light we seek to project into the world. We are also reminded of the power of our Inner World, a Light that even the Star we orbit cannot subdue.

As the Masculine Light has historically sought to diminish the Inner Light, the language of fear has been subtly used to dishonour, dismiss and diminish that of the Yin, or feminine. The Masculine Light has continued to perpetuate the degradation of the Yin on the initial steps into this redistribution of power as those healing, soulful, artistic, community based professions have been ‘forgotten’ by those in power. So for me, this second eclipse of the year is a timely reminder that the Yin has within itself the ability to ‘eclipse’ the consistent futurism, the self-centredness and the myopic focus of the Yang.

I hOpe for a balance between the state of being and the state of becoming in the years ahead, but for now this New Moon eclipse is a timely reminder, ahead of the seminal Solstice, of the necessity of the mytho-poeticism of the Yin.

www.andrewsmith.ie/is-that-so/ for those interested in reading my offering for this eclipse.

Art: An Eclipse Lately Discovered in the Georgium Sidus (1781) and Quite Unexpected by any of the Astronomers. Image via British Museum under CC BY-NC-SA 4.0 licence. English satirical eclipse cartoon, eighteenth century